There are lots of images in the bible to describe the reality of God’s protection over our lives – too many to recount here. One of my favourites is found in a small, rather obscure passage in Isaiah 4;

‘Then the LORD will create over all of Mount Zion and over those who assemble there a cloud of smoke by day and a glow of flaming fire by night; over everything the glory will be a canopy. 6 It will be a shelter and shade from the heat of the day, and a refuge and hiding place from the storm and rain.’ (Isaiah 4:5-6)

The ancient words were written to a people of the future and verse five is rich with imagery that anyone familiar with the story of the Israelites in the wilderness will recognise. There is a big difference, however, for the cloud of smoke and the flaming fire that guided the Israelites to Mount Sinai during the times of Moses, are mentioned here in conjunction with a different mountain, Mount Zion. It is as if Isaiah is indicating that God’s ultimate destination for his people was never intended to be a place of fear, law and judgement but rather, one of freedom, joy and promise. Indeed, in the new testament, perhaps the author of the Letter to the Hebrews had the verse in mind when he penned, ‘You have not come to a mountain that can be touched and that is burning with fire; to darkness, gloom and storm… But you have come to Mount Zion, to the city of the living God, the heavenly Jerusalem’ (Hebrews 12:18-22).

Of course, it should be remembered that these physical mountains, and the ancient narratives around them, are mere shadows that point out greater, spiritual realities - as Jesus emphasised to the Samaritan woman who felt excluded from the promises of God; ‘a time is coming when you will worship the Father neither on this mountain nor in Jerusalem’ (John 4:21). In truth, the time has arrived, and it is those of all 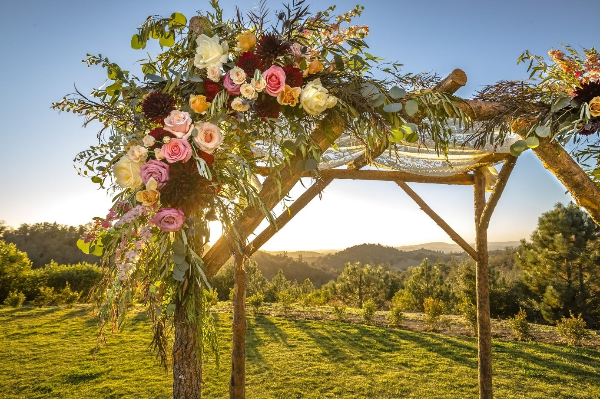 nations, who have been born of God’s Spirit through faith in the Son, that can enjoy the reality of worshipping God ‘in Spirit and in truth’ (John 4:23). For those of us who believe, this is the place of assembly in which we now find ourselves, it is a place of freedom and worship, yes, but it is also a place of protection - Isaiah declares that ‘over everything the glory will be a canopy’. The image could not be more profound, for the word used for the covering in Hebrew is חֻפָּה (chuppah), the very name given to the marriage canopy under which a Jewish couple stand to share their vows – as such the canopy serves as a picture of intimacy with God and of the protection he affords his people. It is this חֻפָּה that God invites each of us to stand beneath, a place that, Isaiah proclaims, ‘will be a shelter and shade from the heat of the day, and a refuge and hiding place from the storm and rain’ (Isaiah 4:6).